He was so sweet and gentle and patient, and I definitely tried that patience in this post. I’m glad I blogged about a lot of these things, because I only vaguely recall some of them, and even the crazy memories make me smile.

I started out with only the best of intentions. That’s how I always start out, being a basically well-meaning person. It’s not my fault if things turn out like crap half the time.

I’ve been treating Ozark’s rancid left ear for a couple of weeks, but not as consistently as I should have. As a result of my semi-inadvertent neglect, I decided last night that he should go to work with me tomorrow for a thorough deep cleaning. After that, we can formulate a new treatment strategy, and start out with a whole bunch less brown, smelly ear gunk, increasing our chances of success.

Before I could take Ozark to the clinic, it was necessary to give him a good brush-out. He’s been looking a little bedraggled the last few weeks, and if I took him looking like that, I would be forced to hang my head in shame. I borrowed a Furminator (a nifty super-duper undercoat rake) from a fellow golden owner two weeks ago, and had yet to so much as remove the blade cover. So, today was the day.

After getting through the morning household chores, I put Brody and Darwin outside so they didn’t complicate the grooming process. Sprocket got to stay, because he never complicates anything. 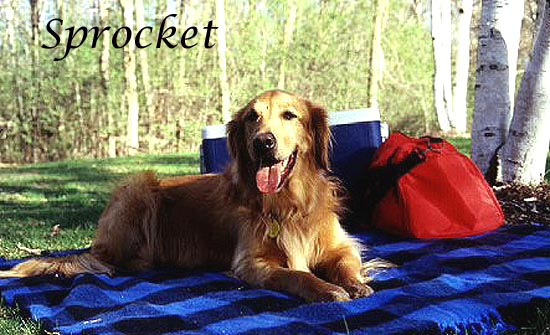 Sprocket’s motto: I’ll just be over here, not bothering anybody.

Darwin immediately began running the fence and barking like crazy, but I couldn’t do anything about it just then. I made a mental note to strangle him later.

I spent the next twenty minutes or so brushing Ozark, and got enough undercoat (without even trying) to fill two paper grocery bags. I could have brushed for another hour and at least tripled the fur-removal total, but portions of my right arm were becoming numb. Time to move on to trimming the foot-fur and toenails.

As usual, I nicked the quick of one nail, this time on the left front foot. I applied some stop-bleeding liquid, and all appeared to be well. Ozark was not totally thrilled, but he’s a very tolerant dog and not prone to holding grudges. I picked up the fur and toenail remnants and ran the vacuum, exploding one bag, installing another one, and vacuuming again. This is the standard procedure.

Not one to panic, I went and got the peroxide, some paper towels, and the anti-bleeding stuff (though I was beginning to doubt its effectiveness). The problem was that his footie was now bleeding quite a bit, and I couldn’t blot the blood flowing from his nail and then get the liquid on it fast enough. Hmm. A new strategy was clearly needed.

I poured a whole gob of the liquid onto a paper towel, and it turns to a gel once it’s out of the bottle. I needed to work quickly. Next step, transfer gob of gel onto my finger, blot blood with other hand, rapidly apply goo to damaged toenail. Observe. No new blood appearing on perturbed pet’s paw. Eeeeexcellent.

Somewhere under one of the kitchen cabinets I had a small brown paper lunch bag with first aid supplies I had brought home when Ozark had a sore on his foreleg that he wouldn’t leave alone. I never used it, but had a hunch it was about to come in very handy. I gathered the peroxide, Telfa pads, medical adhesive tape, anti-bleeding goo (which may or may not be totally worthless), and a roll of purple Vet-Wrap bandage.

Ozark looked at me with tremendous apprehension and attempted to flee, leaving a trail of bloody toe-prints in his wake. I intercepted and returned him to the “treatment area.” (On the floor in front of the aquarium) I repeated the whole blood-blotting-and-goo-applying process, this time following it up with the swift slapping-on of a Telfa pad over the end of his foot. I secured the pad with a systematically-placed round of Vet-Wrap, which was in turn secured with white medical adhesive tape. Wow, that looks almost professional.

Let me state, though, that while I manage a veterinary hospital, I am not now, nor have I ever been a veterinary technician. I do, however, observe a certain amount of treatment, and I watch a lot of Emergency Vets on Animal Planet. At any rate, I thought I did a right-fine bandaging job, considering.

Ozark begs to differ. As far as he’s concerned, his entire left front leg is no longer part of his body. He lies by the aquarium, giving me that mournful, incredulous, “how could you do this to me” look. Whenever he tried to stand up, he’d look at his foot as if it belonged to some other dog with zero fashion sense (I rather liked the purple, but maybe he didn’t) and lie back down. I finally enticed him up onto the couch with me, so there’s a slight chance I’ve been forgiven.

It’s entirely possible I wrapped his paw in some unnatural and potentially hazardous position. It’s also possible I wrapped it too tightly, and he has no circulation below his elbow. For these reasons, I will take it off before bed tonight, and hope it doesn’t start bleeding again. I’m not even going to think about removing the eleven thousand blood spots from the carpet until I’m sure this entire unfortunate situation is behind us.

Now I have two reasons to take him to work tomorrow, I guess. Ear and foot. Of course, if he didn’t already have a disgusting ear, I wouldn’t have been hacking away at his toenails today, and we wouldn’t have the toe problem. All my fault, of course.

At least he smells pleasantly of peach-kava grooming spray and is relatively tangle-free.

2 thoughts on “Classic: Worst. Dog-Mom. Ever”