Oliver the Wonder Poodle has been with us almost a year. On his gotcha-versary, expect a lengthy post about everything he’s taught me about poodles in that time. But one very amusing thing happened around six weeks after he arrived and opened my eyes to the ingenuity, curiosity, and unflappable nature of the breed. He was five and a half months old and a bit over thirty pounds at the time, and too smart and intrepid for his own good.

My mornings follow a very structured routine, because I am Not A Morning Person, and varying from the expected process results in chaos and throws me off for the rest of the day. Things must not happen out of order, and nothing requiring independent thought can take place until I’ve been up at least an hour. If I ever experience an early morning house fire, I’m doomed.

Having two puppies made this a challenge, but we were doing pretty well. They wake me up every morning–really heckkin’ early–all happy and wiggly and adorable, they get breakfast, I get coffee, and everybody is set. 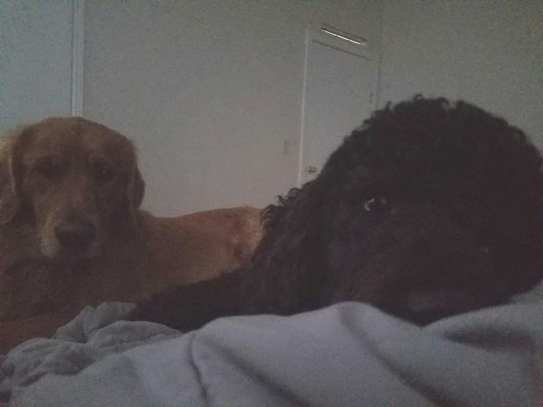 I know this is dim and grainy, but I did warn you they wake me up early. This is what I see every morning when I open my eyes. Not a bad way to start the day.

One particular morning in early April, I took the dogs out then popped back inside to unload the dishwasher and let them run off some puppy mania. A few minutes later, I noticed Mozzie at the sliding door. He had on his “worried ears,” and his eyebrows clearly communicated “you’re not going to like this, but I swear I had nothing to do with it.”

I looked for Oliver, but no Oliver was to be found. I put my shoes back on and clomped down the deck steps into the yard, but still didn’t see a poodle puppy. Mozzie decided to be helpful–because he’s a golden and that’s what they do–and pointed out a hole under the lattice surrounding the deck.

Investigation quickly revealed the wayward poodle under the enclosed deck. For reasons known only to him, Oliver had dug under the lattice, wriggled under the deck, and now couldn’t get out because the angle of the hole was wrong.

Thankfully, he wasn’t upset about it. If he’d been freaking out, I’d have had to go all mama-dog and rip off the lattice and probably die of splinter poisoning. But Oliver knew he wasn’t in immediate danger, and I had everything under control. Poodles have a lot of incredible abilities, but mind-reading isn’t one of them. This was fortunate, because if he knew what I was thinking just then, he’d have been a lot more concerned.

He sat there looking at me, confident and unperturbed. I, however, was fairly perturbed. I hadn’t had coffee yet, and I avoid physical exertion at all times, but it was evident I would have to dig the little monster out of there before my coffee-drinking could resume.

I located the garden rake, which would have to do, because while I was sure we owned a shovel, it was probably in the shed, which was padlocked. I had a key to this, of course, but figuring out which one it was would require more mental dexterity than I have before coffee.

Rake in hand, I set about deepening the hole and extending the angle back under the deck so Oliver could crawl out.

Dig, dig, dig. Scoop, scoop, scoop. Pause to catch my breath and look at the unrepentant poodle sitting there smiling at me through the lattice-holes.

Oliver occasionally attempted to help, but didn’t seem to be very effective. I was calling bullshit on the whole thing, because he got under there in the first place, and those paws looked pretty capable, but all he could do was scratch around, occasionally nibble at the dirt, and stick his naughty-but-adorable head out.

Mozzie mostly paced nervously and wandered over from time to time to assess my progress and make sure nobody was in trouble. He’d done his “come quick, Timmy fell down the well” part, which was apparently as involved as he planned to be in the whole matter.

Finally, I was sweaty and my back was cramping, I had dirt embedded in my knees and under my nails, and I probably had spiders in my hair, but Oliver managed to squirm out under the lattice. I immediately dropped a log in the hole to prevent further incidents. Mozzie was ecstatic, because his buddy was available for chasing again and I had stopped scowling and muttering.

Having puppies was not on my to-do list before I got these two. I’d been declaring emphatically for the past ten years that my puppy-wrangling days were behind me. I could not have been more wrong. Despite the house training and crazy antics, these two goobers have brightened my world and made my life a lot more interesting.

I just prefer it if they save the interesting stuff for after I’ve had coffee.

3 thoughts on “Rescuing the Rescued Poodle”