Yesterday, I shared this Classic Fermented Fur post about when I cut the quick on one of Ozark’s front toenails and it didn’t want to stop bleeding. I found a non-stick pad and some Vet-Wrap to solve the problem.

I hadn’t even thought of Vet-Wrap in years, but I found myself needing to order some today. The only explanation is that the Universe noticed yesterday’s post and has a twisted sense of humor.

The last day or so, Oliver has been licking his left front paw. Mozzie, being a golden and by definition a caring, sympathetic dog, has been helping. Which is really the opposite of helpful. They sometimes do this if Oliver has just been to the groomer and has some clipper burn on his toes, but he hasn’t been to the groomer in almost a month. (Note to self, schedule that for in a few weeks.)

I thought maybe he stepped in something interesting in the yard and it would pass as soon as all the lickable goodness was gone. But a while ago, he was on the couch with me and I noticed his left dew claw was at an odd angle.

Standard poodles normally have their dew claws removed when they’re a few days old. They also customarily (in the US) have their tails docked by 1/3 to 1/2 so the remaining tail is straight. I’m very firmly against cosmetic alterations such as tail docking and ear cropping, so I was fine with Oliver having a natural tail. Dew claws can be a problem if they’re loose or floppy because they tend to catch on things, but Oliver’s are nice and tight, so I wasn’t worried.

But I probably should’ve been because at some point recently, he must have caught it on something. Now it’s loose-ish, and sticking out enough I noticed it through his long leg-hair.

What to do? I’d really like to avoid a trip to the vet. The first thing they’d do is suggest I have the dew claw removed, likely both of them, and at his age this is a pretty big deal. For three-day-old puppies, the cartilage is still developing, so it’s a simple snip and a dab of surgical glue, though I would still rather not do this unless I had a reason, like the puppy was going to be a field dog and likely to injure it. But at over a year old, this would be amputation, involve general anesthesia, stitches, bandages, and probably the Cone of Shame.

I think the first step is to see if I can manage this. It doesn’t appear to be painful, since he’s not limping or holding his paw up, and he’s still tearing up the yard running around with Mozzie. Other than some licking, and giving me dirty looks when I try to examine it, it doesn’t seem to be bothering him a lot.

I ordered some Vet-Wrap and medical tape, but even with Amazon Prime it will take two days to arrive. So I checked the “medical supplies and owie-repairer” basket in my bathroom and found a roll of gauze and some waterproof tape. Oliver was surprisingly cooperative as I wrapped it. My theory is that holding the dew claw tight to his leg for a couple of days should give it a chance to heal and tighten back in place.

I hope he’ll leave the bandage alone. I have a large Comfy Cone, but I have a feeling this would introduce more chaos into the household dynamics than any of us would like. He’s currently in his crate with a bully stick, my theory being this will keep him from paying attention to the bandage-wrapped appendage until he gets a bit used to having it on there. 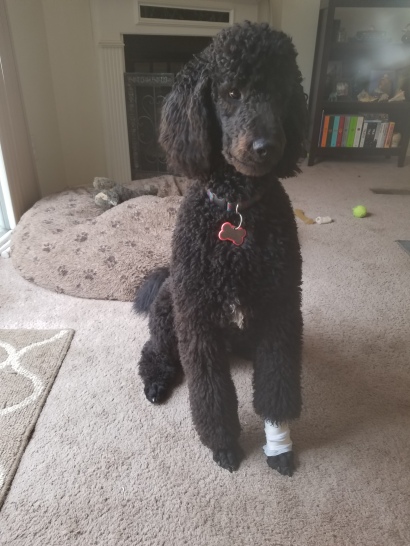 The Poodle Is Not Amused

I guess we’ll see. If he won’t leave it alone, or if this doesn’t work and he keeps messing with it after I take off the bandage, we’ll have to visit the vet. Since by then I’ll have tried the “wrap the area and cross my fingers and hope for the best” option, the next step might end up being amputation.

He’s a poodle, and therefore brilliant, so maybe I can explain it to him. If he gives it some thought, I’m sure he’ll recognize the benefits of keeping all his original parts where they belong.

Nothing to do now but wait and see.