Last summer, I contributed to a Kickstarter for a new dog toy, called Tearribles. The idea was to create a toy that was hard to destroy, but still allowed dogs the fun of tearing things apart. For my reward, I chose one XL Tearrible, the big purple monster.

There are four parts that can be pulled off–the tail, each arm, and the legs (which are one piece). The body is covered in the customary plush fabric with a layer of stuffing underneath. Inside, however, is an underlying structure, made with a sturdy nylon mesh with more stuffing and a squeaker.

Nylon mesh is also used in Fluff & Tuff toys, which are my favorite for my two rambunctious, determined puppies. I have four or five of them, and they have yet to inflict significant damage to any of them, and the newest ones are already four months old.

The removable bits of the Tearrible are held securely in place with double strips of heavy-duty Velcro, so you can tuck them back into place when they are pulled off.

This all sounded great, and an extra interesting activity for Destructo Dogs 1 and 2. But as the saying goes, “no plan survives first contact with the enemy.”

Once Mozzie decided the Tearrible wasn’t going to explode, attack him, or make a sound like the freezer opening (his weirdest phobia, which is saying something, because he has a lot), he immediately focused on the tail. He pulled it off approximately 47 thousand times, and the tail-bit is small enough that I didn’t want him chewing it independently of the toy for fear he’d find a way to swallow it, so I put it away. 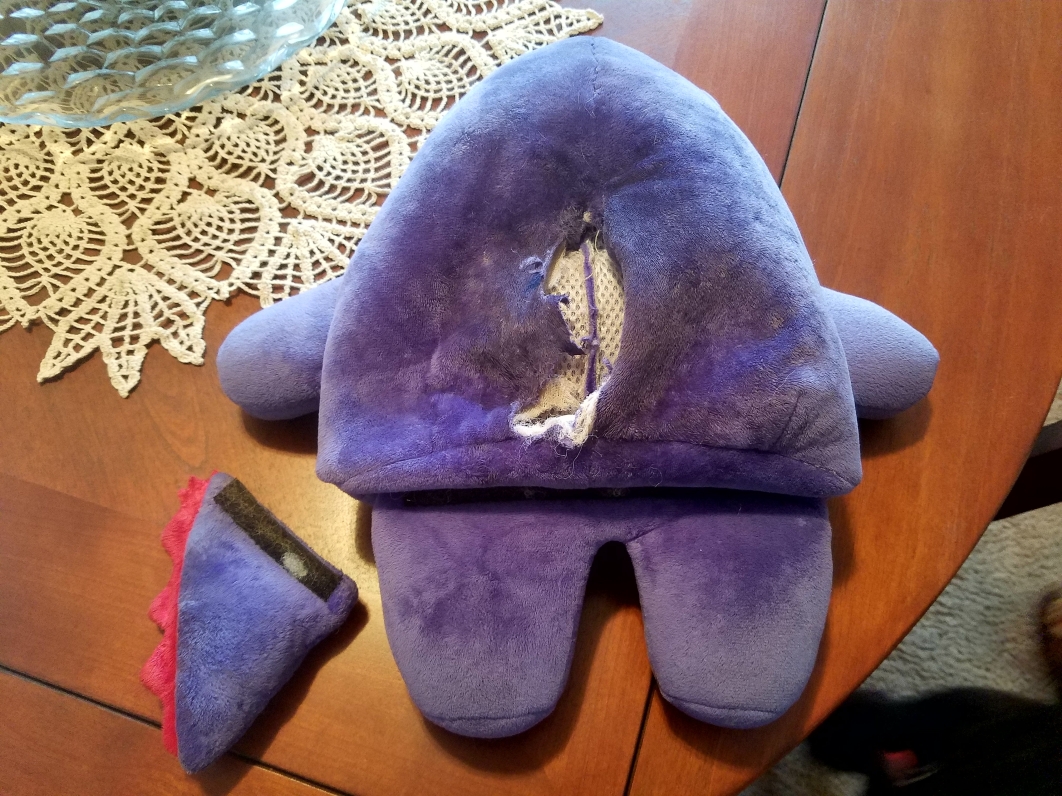 The ears are non-removable and stick up, so one ear also received some toothy attention. They’ve pulled an arm off once or twice, and they’ve been replaced successfully. They have yet, after about a month, to pull off the legs.

Deprived of the option of removing the tail another ten thousand times, Mozzie focused on the tail-hole. He has totally ripped Mr. Tearrible a new one, removing all stuffing within tooth-range, which I pick up and throw away. I couldn’t reattach the tail now if I wanted to. While the toy is looking a little the worse for wear, the inner nylon layer remains intact, keeping the bulk of the stuffing and the squeaker inside.

Having tear-off-able parts is probably a ton of fun for a lot of dogs, but I don’t think Mozzie and Oliver fully appreciate it. They’re really only interested right now because of the tail-hole and what they might be able to pull out of it. 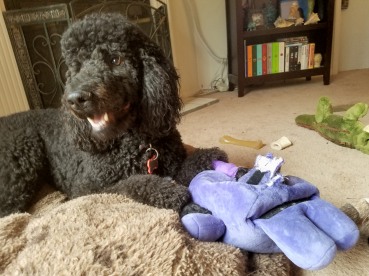 If I were redesigning this toy, I think I’d do away with the tail, as that’s obviously a weak spot and resulted in these two being qualified canine proctologists. Or the tail could be large enough that it wouldn’t be a potential choking hazard or gastrointestinal obstruction for a large dog. The ears are also vulnerable and should perhaps be reinforced somehow or done away with.

The pricing ranges from $20 for the small Tearrible to $30 for extra-large, which is not out of line with other quality toys. I pay about $20 for the smaller Fluff & Tuff toys, and $30 for the extra-large gator. Since Oliver and Mozzie aren’t all that into the “rip the purple monster limb from limb” part of the Tearrible experience, I probably won’t buy another, sticking to the one-piece Fluff & Tuff toys instead. The plush outer casing over the nylon mesh is used in both Tearribles and Fluff & Tuff, and is a great element to reduce the amount of toy-unstuffing your dogs do.

If your dogs like dismembering things rather than de-stuff-ify-ing everything, this could be a fun toy to add to the collection. It’s well-made and well-designed for what it’s supposed to accomplish. My guys just seem to have different priorities.