Yesterday was Valentine’s Day. In the past, we made a fairly big deal of the occasion, since our first date was supposed to be for a Valentine’s dance at our high school. The dance was canceled, but we still went out on February 13, 1982.

The last 5-10 years, though, we haven’t really done much. This is fine with me, as I’m not really a holiday person. Last year, we adopted Oliver on February 13, so our first-date-anniversary has now been usurped and shall ever after be known as Oliver’s gotcha day. 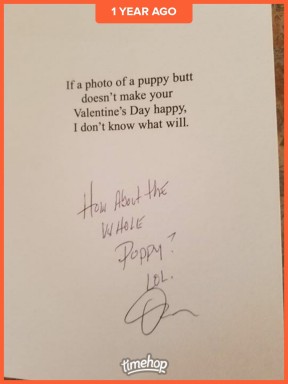 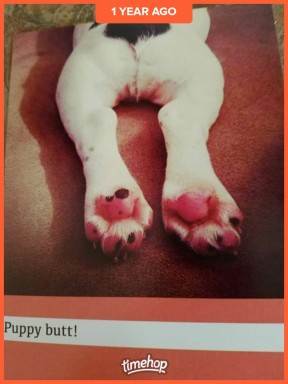 While we don’t officially make a big deal of Valentine’s Day, Tom doesn’t always uphold this unspoken agreement. Or maybe it’s spoken, a little, when I say, “I’m not getting you anything. Don’t get me anything. It’s just a day.” I’m either very low-maintenance about holidays, or a terrible wife.

According to Time Hop, three years ago, Tom violated this agreement thusly:

If you know me at all, you’ll see how well my husband gets me. I do love all things zombie apocalypse, and I definitely love chocolate. And distilled beverages. I even wrote two zombie apocalypse books, The Dead Survive and Fallback, and you should absolutely read them if you’re into that sort of thing.

I still have the bottle. The vodka undoubtedly didn’t survive the weekend. Valentine’s Day was on Saturday.

This year, he did this:

Let’s break down the elements.

Every girl has three pairs of skull leggings, right?

All very thoughtful, yes? It’s especially generous when you factor in the fact that Tom is being quite careful about his eating habits, including not having a lot of sugary snacks. Which means I will need to hide the chocolate and give him a few pieces in the evening, so he can enjoy a treat without the temptation of over-snacking.

This probably sounds strange, one spouse monitoring and rationing something in which the other might tend to over-indulge. Until you know he also does the hide-ration thing for me, only in my case it is the liquor bottle.

Sometimes I find it, and those days do not go well, because I am mind-bogglingly bad at self-regulating in this particular area. If I locate the stash, the answer to “How much alcohol is in the house?” is “None, because Lori drank it.” But mostly, Tom is an extraordinarily good thing-hider, and he provides my evening nightcap ration, so I can chill and watch some mindless TV and try to get my head to slow the hell down enough that I can go to sleep.

Yes, I have a pretty awesome husband, still adorable even though this is our 37th Valentine’s Day together. However, I did maintain the “do nothing” policy for the occasion, and now I feel like Sheldon Cooper does about Christmas.

Sheldon: Oh, Penny. I know you think you’re being generous, but the

foundation of gift-giving is reciprocity. You haven’t given me a gift, you’ve given me an obligation.
Howard: Don’t feel bad, Penny, it’s a classic rookie mistake. My first Hanukkah with Sheldon, he yelled at me for eight nights.
Penny: Now, honey, it’s okay. You don’t have to get me anything in return.
Sheldon: Of course I do. The essence of the custom is that I now have to go out and purchase for you a gift of commensurate value and representing the same perceived level of friendship as that represented by the gift you’ve given me. It’s no wonder suicide rates skyrocket this time of year.

So, yeah. Also, I keep wondering what I’m going to do with that giant skull mug, and it occurs to me it would be pretty awesome if it was full of a massive dirty martini, but only moderately dirty, because I’m not a tramp.

And if it were full of martini, I’d probably feel a lot less bad about the gift reciprocity issue.