As readers and writers of post-apocalyptic fiction, we’re all preparing for the inevitable. For some, this means, “I should probably consider buying some bottled water and maybe a flamethrower.” For others, it’s more like, “I have an underground bunker in the woods behind my house crammed full of toilet paper and fifty-pound bags of rice, and I don’t even like rice.”

We all know what we should stockpile. The obvious supplies include food, water, weapons, ammunition, medical supplies, tools, things to make fire (nobody wants to be chilly during the apocalypse, and raw snake tastes terrible), fuel, and coffee—because if the apocalypse starts before ten a.m., I’m going to be at a serious disadvantage.

Everybody knows about that stuff. Which means when some moron decides to hide the fact they’ve been bitten, turns, and eats everyone in their hideout, there’s bound to be a good bit of those obvious survival supplies there for the taking. So I think we should consider the less obvious, but very useful, items we should have on hand to make our zombie apocalypse experience more “hey, this isn’t as bad as I thought it would be” and a lot less “oh, shit, I’m pretty sure I shouldn’t be able to see my own intestines.”

To compile this list, I did extensive scientific research, by which I mean I posted about it on Facebook. In no particular order…

Underpants: This is a no-brainer. Nobody likes dirty underwear, and once you turn your only pair inside out, unless an unexpected lull in the fleeing and head-chopping allows you free time to do laundry, you have a problem. And considering the number of times you’re going to walk around a corner and end up screaming, “Aaaahhhh, zombie herd, and I left my flamethrower in my other purse!” you can assume there will be a lot of soiled undies. You’re going to need plenty of spares.

Icy Hot: What with all the machete-swinging, running away, and climbing ladders because zombies don’t understand how ladders work, you can bet there will be a lot of sore muscles. It’s also possible the unspeakable Icy Hot stench will mask your Juicy Human smell. But if it turns out Icy Hot is like barbecue sauce or bacon gravy to zombies, you’re totally screwed. Further research might be required, though I suspect test subjects will be hard to find.

Note: Under no circumstances should the Icy Hot be used in any proximity to the underpants (see above) unless the whiner in your group really needs to be taught a lesson. It’s also an acceptable consequence for the guy who asks everyone you encounter, “You been bit?” because the zombie apocalypse is no excuse for sloppy grammar.

A Golf Umbrella: Sure, they’re big and bulky, and when a major downpour occurs they’re always in the back seat of the car you didn’t drive that day, but they could be very 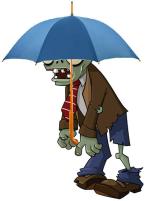 handy. Not only would a golf umbrella keep the rain off, it provides shade if your apocalyptic adventure is happening where it’s hot and lacking in leafy trees. You can use the pointy end to stab a zombie in the eye-hole (Pro-tip: Close umbrella first), and should the guy next to you suddenly erupt in a fountain of blood and chunks of innards, you can use the umbrella to shield yourself from the gore as you run away. Hey, he was pretty much dead already; you couldn’t have saved him. The zombie apocalypse is no time for sentimentality.

A Small, Light-Powered Calculator: Life in the apocalypse is essenially one giant story problem, and who has time to sit down and scratch out math problems in the dirt with a stick? Maybe some of you can do math in your head, but I find numbers way too slippery, and possibly evil. When we encounter a swarm, I want to be able to quickly calculate how many zombies each member of my group needs to kill. Why? Because if someone isn’t doing their fair share of zombie extermination, I need to know who to trip the next time we’re forced to make a run for it. It’s called “survival,” people. Don’t judge. Also, it’s important to know how to equally divide seven cans of creamed corn among eleven people, because you know someone’s going to cheat.

Several Whoopee Cushions and/or Cans of Spring-Loaded Snakes: It has been pointed out to me that the zombie apocalypse can be a bit grim and depressing, and everyone could benefit from some laughter. Except me. I hate practical jokes, and I’ll stab you in the neck with a rusty spork, which would make me laugh, but you probably wouldn’t appreciate it.

Disclaimer: They say laughter is the best medicine, but I don’t think that works with zombie bites, so you should probably cut off your hand if you’re bitten, just to be safe. Or, you know, whatever body part is affected. Unless it’s your head. That seems counterproductive.

A Bouncy Castle: This is tangentially related to the items above. No, you can’t be expected to pack a bouncy castle, let alone inflate it, but ever since the second episode of Fear the Walking Dead in which the featured family was peeking through the blinds at the neighbor’s kids playing in a bouncy castle while someone with a distinctly zombie-like appearance approached, I’ve wanted to see a bouncy castle full of kid-sized zombies. I mean, how awesome would that be? 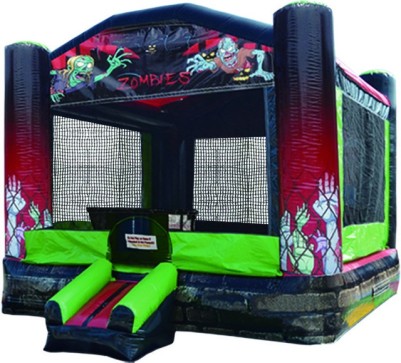 I was woefully disappointed, so if you do encounter a bouncy castle, fill it with tiny-human zombies if it doesn’t already contain some, because that is an opportunity that must not be missed. And if you have a cell phone with any battery left, take a damned picture, because when someone re-invents the internet—possibly Al Gore’s grandson—I absolutely need to see that shit.

Car Air Fresheners (But not the pine tree kind. I hate those.): Despite the abundance of clean undies, assuming you took my advice, bathing is going to be a relatively infrequent thing. Everybody knows from years of research (watching campy horror movies), the instant you take off your clothes, whether to bathe or have slutty teenage sex, that’s when the bad stuff happens, so most people won’t often take that risk. You need these air fresheners—I suggest something like “ocean breeze,” personally—to mask the funky aroma of your travel-mates as you continue your endless search for a safe place to hide out. 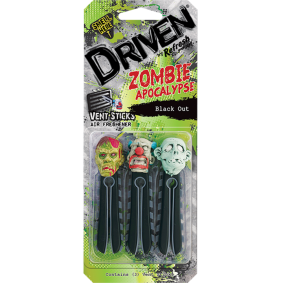 What would zombie air freshener smell like? Do we really want to know?

Yellow Pages (assuming you can find any, because everybody just Googles stuff now): An alert aficionado made this suggestion, and it has a lot of merit, as long as you’re not in a major metropolitan area where phone books are six inches thick and weigh forty-three pounds.

First, you can strap them to your forearms as makeshift armor. Studies show the majority of zombie bites occur on the hands and forearms. I might have made up these studies, but I stand by their validity. Also, if you failed to find someone who got eaten before they used up all their stockpiled toilet paper, pages from the phone book could be a substitute. Perhaps best of all, you’ll have a handy guide to the location of all the liquor stores sporting goods stores.

There are several intriguing variations, as well. If you enjoy, for example, crossword puzzle books, you have a source of entertainment on those rare zombie-free evenings. For younger survivors, consider coloring books (don’t forget the crayons!) or connect-the-dots books, but be sure you get small-sized ones or they’ll be too big to strap to their kid-sized arms. I hear some of you shouting, “Sudoku!” but I’m ignoring you. From what I understand, those puzzles involve numbers, and I’ve already told you how I feel about math.

This list is just the beginning. Be creative! Look around you and imagine how ordinary items, things you’d never think would be essential to your post-apocalyptic survival—possibly with amusing side effects. What would you include in your Z-Day supply stash? I’m going to go look in my junk drawer and that weird box in the hall closet and see what other useful things I can find.

PS: As you see in the header, I wrote a couple of zombie books. If you’re interested, you can find them HERE.