I’ve only been knitting about a month. I’ve made a bunch of practice swatches, a dog dishcloth, a scarf, and am working on a second scarf. Thank goodness for Facebook, because my crafty friends have been giving me helpful tips, including using a lifeline.

As much as it offends my over-achiever personality, mistakes happen. Stupid, soul-sucking, project-tainting mistakes. In crochet, since you work one loop or stitch at a time, it’s easy to rip out the work back to the mistake, even if it feels like a rusty ice pick to the heart to destroy hours’ worth of yarny goodness.

With knitting, though, it’s much harder. Some of this is because I’m still new. I’m at about a second-grade level when it comes to knitting, while I have a metaphorical PhD in crochet. But with knitting, you work with a full row of stitches on the needle. If you discover a mistake while on the same row, like if your stitch count is off at the end, you can usually figure out where the mistake is and un-work the stitches back to that point. Still tricky for me, as I can still lose a loop that way, but it’s possible.

If you don’t realize your mistake until several rows later, the expletives begin to fly. If you simply start pulling out rows to get back to where you can fix it, you then have to try to identify one complete row of loops and get each one back on the needle without losing a single one. Tough enough in a 35-stitch-per-row scarf. Much harder for a wider shawl or blanket.

Which brings us to Monday night and the lifeline.

I’m doing a zigzag scarf. It has a left-slanted segment, then a right-slanted one, ten rows each. Each consists of a pattern row and a purl row, repeated five times for ten rows. Late Monday, I discovered my mind had wandered and I had repeated the left leaning segment, meaning I had a long, 20-row left chunk, totally breaking the symmetry. Can’t fix that by throwing in an increase or decrease in the next row.

No choice. I had to go back to the end of the previous segment and re-work the ten offending rows. Thankfully, I’d listened to Jody and had been putting a lifeline through rows 10 and 20 each round. This is a purl row, so no worries about getting it through a K2tog or YO.

In theory, this was all hunky-dory. In reality, not so much, and I almost got a nosebleed thinking about it. But a-frogging I did go, with a churning stomach and nervous sweat upon my brow.

When I got to the lifeline, I handled the scarf like it was made of nitroglycerin, tissue-thin crystal, and bunny-fluff. I carefully and meticulously inserted the needle through each stitch that had the lifeline…and we all survived. 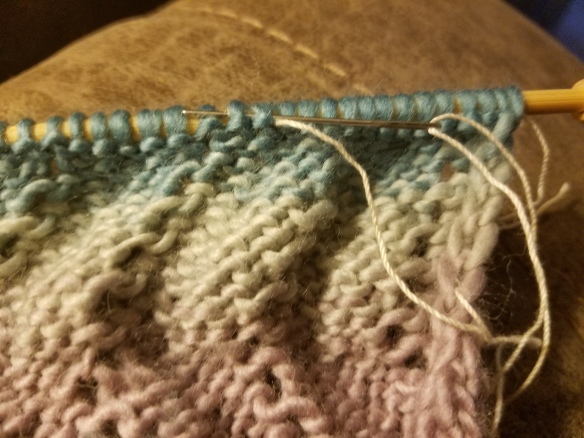 This is how I placed the line. I use crochet cotton and a tapestry needle and work it carefully through each loop, being sure to get all strands of the yarn in each stitch. I do this in row 10 and 20, and when I get to 10 again, I pull out the first line and use that, so I always have two. 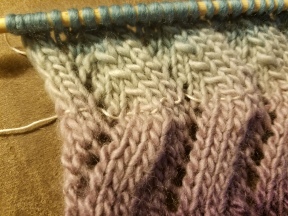 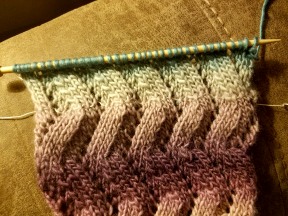 I almost didn’t bother with lifelines, because I’m pathologically lazy, and taking time out from knitting to do something so dull and utilitarian makes my teeth itch. But lifelines are like insurance. A nuisance to obtain and pay for, until you need it. The claims are a pain to deal with, and the item in question might not ever be as pristine and perfect as it once was, but in the end, you’re glad you had that security.

Bottom line, I’m still alive, my scarf is still alive, and my house isn’t full of broken objects hurled about in a flurry of frustrated anguish. I’ll have to be a much, much more experienced knitter before I consider “working without a net.”