We did go out last night, and I didn’t die. I did talk to a bunch of people whose names I don’t remember, despite having asked them several times, and I met a nice dog named Zoe, because I always remember dog names. I also snuck a couple pictures of some random guy because he had the prettiest long blond hair I’ve ever seen, but Tom convinced me I should definitely not give him my card and tell him he should seriously consider being a cover model because it’s almost impossible to find good stock photos of guys with long blond hair.

Now, brace yourself. I went out today too. Two days in a row, shower, bra, public. Me. It was a beautiful, warm, sunny day, so we took the Direwolves to the beach for a few hours. We usually go to Fort Macon State Park because it has plenty of parking, and a nice walkway over the dunes.

Mozzie and Oliver are maniacs going to and from the car, but once we get to the beach,  they’re both so good I can’t even believe it. They walk nicely, splashing in the surf, not reacting to people or dogs we pass, and lie calmly on the blanket when we get back to our spot.

Standard poodles definitely attract attention. Two people asked if Oliver was a standard, and one of them even noticed he has his full, natural tail.

I am absolutely exhausted. I’ve walked more in the past two days than in the previous two months, so I’m going to sit here watching TV and knitting until it’s time to watch The Walking Dead tonight. I’m finally almost past the orange part of the yarn, thank goodness. I hate orange, but you can’t have “rainbow” anything without it, although if I were in charge of the color spectrum, I’d definitely change that. 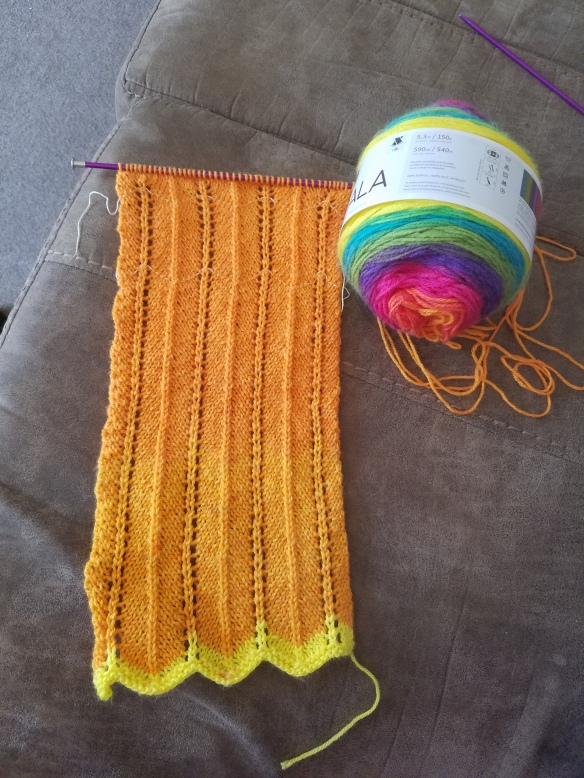 The Direwolves have just reminded me I absolutely can’t sit here the rest of the day, because it’s supper time, and they’re hungry. They have me very well trained.