It’s going to be a long summer.

I’ve blogged a few times about the new neighbors in the small rental house across the street. As best I can tell, there seem to be parents and a couple of teen boys who actually live there, but since the menagerie of children changes hourly, I can’t be entirely sure. There are bigs and littles, girls and boys, elementary, middle school, toddlers…

And I’m not a kid person. I don’t hate them, exactly. The old saying is children should be seen and not heard, but I sort of prefer they be neither seen nor heard.

There’s the basketball hoop monopolizing the street, the ball spending more time in our yard due to the slope than on the actual “court,” and the piles of worn plastic toys. There is a hobby horse that looks alarmingly like one I had when I was a kid…and I was born in the 1960s. Pretty sure there’s some sort of consumer safety issue there.

Then a four-person tent appeared in the front yard. Not the side yard, of which there is roughly a half acre, or the back yard. Right in front. Presumably to accommodate kid-overflow. I think the mother does daycare, but who the hell knows?

Now we have a new sight to behold. The other morning I heard an engine and thought, “Yay, they’re mowing their yard.” But it kept going. For a long time. I peeked through the blinds, and thought it was a strange way to mow, going all over the place. Oh, and up and down the street too.

Huh. It’s not a lawnmower at all. Not anymore. Now it is a former lawnmower with the mowing bits removed, serving as an ATV, and kids are driving it around. Which I’m fairly sure isn’t especially safe. 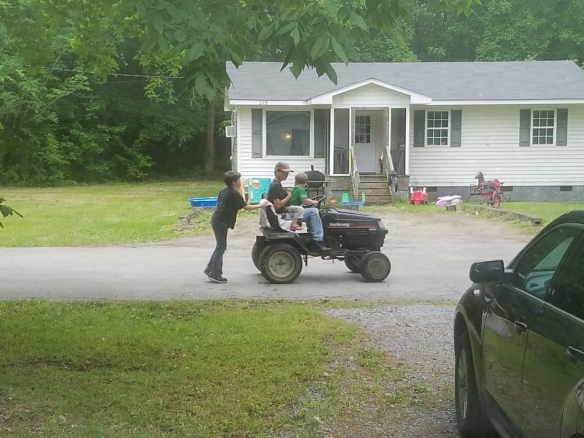 The giant blue tent would be just out of frame to the right.

The only thing I’m clinging to at this point is they do not have a dog. Because if they had a dog tied in the yard or roaming at large, Steps Would Be Taken.

The summer may be long, but I’m hoping their lease is short.