I view people without dogs with either pity or suspicion, depending on whether their doglessness is because they love dogs but due to circumstances beyond their control can’t have any, or because they simply don’t like dogs. The former is tolerable because it can someday be remedied. The latter…does not compute, and I don’t think I know how to even have a conversation with those people

The week between when our beloved Great Pyrenees, Brody, died in November 2016 and when we found Mozzie and brought him home was the only time I’ve been dogless in my adult life. It was surreal beyond description, and I hope I never experience such emptiness again.

Since Mozzie and Oliver will be the stars of this show, as well as the brains of the operation, I thought we should talk about how they came to be here. As of right now, Mozzie–a golden retriever–is 17.5 months old, and Oliver–a standard poodle–is 15.5 months old.

To set the stage, in 2016 we had two dogs. Darwin was an 11-12 year old golden retriever, and Brody was an 11 year old Great Pyrenees. They were dogs number 11 and 12 in our lifelong pack. Darwin was our sixth golden (the fifth adopted through RAGOM in Minnesota), and Brody was our first Pyr, though we’d had two Pyr mixes in the past. 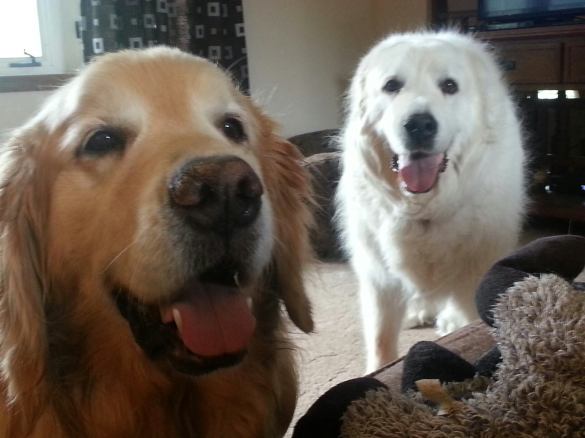 2016 turned out to be a catastrophically shitty year. Darwin was diagnosed with cancer in June, and lived only six more days. Despite being rescued at age 3 in a horribly neglected and emaciated condition, he was the happiest, bounciest, sunniest, orneriest dog in the history of ever, and losing him was crushing.

Brody had been declining for a long time, with more and more trouble with his back legs, and the day before Thanksgiving, we knew it was time. He could no longer stand or walk on his own, and at 100 pounds, we were limited in our ability to help him.

A few years earlier, I’d consulted the crystal ball and thought this might happen one day, and we tried to adopt a third dog, but Brody and Darwin vetoed this notion very adamantly. So I knew there would be a time I had zero dogs, though my canine-obsessed mind had trouble comprehending this.

Then it happened, my brain imploded, and things went a little crazy. The local golden rescue wasn’t getting in any young adult males (I’d applied and was stalking their page on an almost hourly basis), and neither was lab rescue. I’d toyed with the idea of a smaller breed dog, maybe a corgi or small lab mix or a Nova Scotia Duck Tolling Retriever, but not having had a golden since Darwin died, it soon became evident I needed a golden in my life.

Then I saw an ad. A family had three puppies left over from a litter. They’d been supposed to go to new homes in October, but the area experienced severe flooding around then, and some puppy families backed out due to dealing with their own flood situations or being unable to reach the puppies. They were 3.5 months old, past the usual adoption age…and I had to see them.

Long story short, I found Mozzie. I had not wanted a puppy. I swore up and down, loudly, that I did not want a puppy.

Turned out I did. 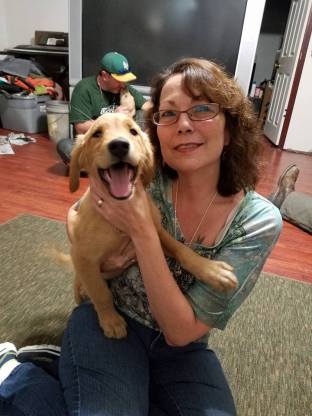 Once Mozzie (our 13th dog and 7th golden) had been with us a month or so, I knew the only thing that could keep up with a puppy was another puppy. It damned sure wasn’t a 50-something-year-old woman who spends most of her waking hours on the couch with her laptop.

Don’t let the cute fool you. He was a 900-mile-an-hour puppy whirlwind two seconds later.

Once again, the universe laughed at me. I think it might have peed itself a little.

The morning of February 13, 2017, I awoke and began checking out rescue listings, as usual. There had to be a nice, calm big brother out there for our Mozzie. Then I saw a post from Colonial Capital Humane Society. They’d been asked to assist in re-homing an almost 4-month-old standard poodle puppy. He was already in his third or fourth home, and the people who had him wanted him gone.

I applied. I messaged. I was immediately approved, because seriously, who is a better qualified puppy-mom than me? Nobody, that’s who.

Oh, I did check with Tom first. We hadn’t discussed standard poodles only because we never imagined we’d find one in this area. Finding anything that isn’t a pit bull or some sort of hound is already hard enough. All my years in vet clinics, I’d known poodles. Also, a dear friend had one, and she also had a golden when she got him, and it was a great match. Tom’s uncle had a black male standard. We were sold.

But I wanted a day or two to prepare. I’d need another crate, had to get my brain prepared for a second puppy, when I had sworn I didn’t even want one puppy. Shows how much I know.

The hitch was if we wanted him, we had to take him immediately. The people who had him had informed CCHS that they were out of puppy food and weren’t buying any more. They had also posted online and were planning to hand this puppy, who they called Scarecrow because he was afraid of everything, to the first person who knocked on their door.

Thank doG, the CCHS volunteer we were working with was having none of that. She left work and charged over to the house, literally taking this puppy out of the hands of some random person who was more than likely planning on using him to make “doodles” that could be sold at a tidy profit. 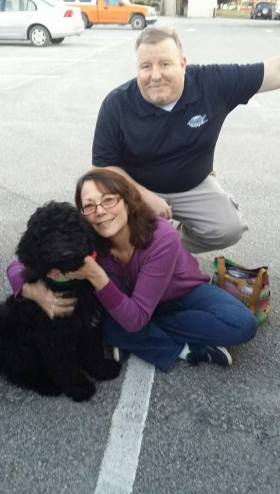 So, dog #14 turned out to be standard poodle #1. We named him Oliver, and let me tell you, that dog is not afraid of anything, even a little bit, unless it’s not being the center of attention. He and Mozzie became bestest buds, and I’ve never had a more bonded pair  of brothers, ever.

The only drawback is I’m outnumbered and outsmarted. Goldens are incredibly smart, learn anything quickly, and are eager to please. Poodles are strategists, their intelligence is off the charts, and they never miss anything. The two of them together could found a mid-size nation or destroy civilization, depending on their mood. 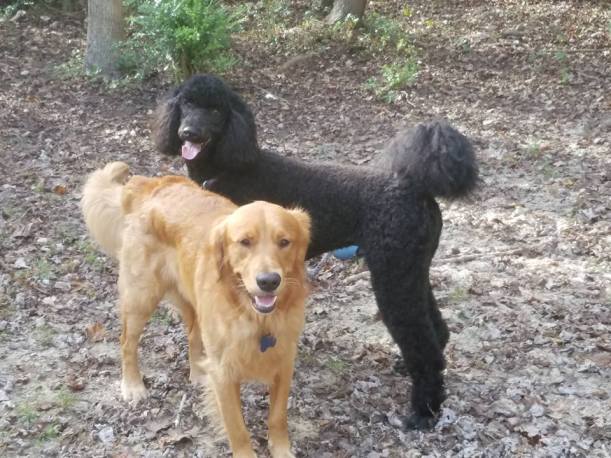 Since I work at home, and leave the house only under duress or promises of dirty martinis, I’m with these two 24/7. They’re my entertainment, my sounding board, my “good morning snuggles alarm clock,” my bathroom monitors, and my security system. I don’t know what I’d do without them.

What about my theory of always having at least three dogs, so I never end up in the zero-dog situation again? I think I have to let that go, because I can barely keep up with these two, and they get along so well I don’t want to do anything to upset the biscuit wagon.

So, there you have it. Mozzie and Oliver. Mozziver. The Direwolves. Poodledactyl and Goldensaurus. My boys. 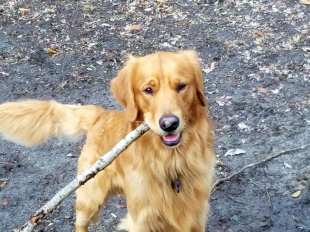 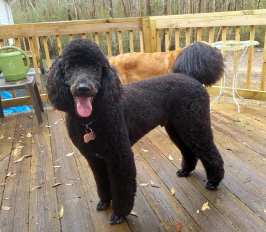