The chihuahua invasion of Saturday got me thinking, and then yesterday I took these two photos of Mozzie.

They were taken about twenty seconds apart. He was snuggling happily with me on the couch, then there was a very, very loud boom of thunder.

Mozzie isn’t usually afraid of storms, which is good because he’s afraid of so many other things. I can control when I open the freezer or take out a plastic bag, but my superpowers do not yet extend to controlling the weather. This thunderclap, though, was incredibly loud, close, and seemed to go on forever. Even made me jump, and I love storms.

So, why am I showing a photo of my scaredy-pup? Because a lot of people look at the picture and think how cute it is, sweet, look at the adorable, meek golden-boy. And, yeah, he’s cute.

This photo is a very good illustration of a dog who is freaked-the-f**k-out. He’s panicking inside, almost paralyzed with anxiety over things he doesn’t understand and can’t control.

But I realized a lot of people don’t understand dog body language. If you or your child were out at a park, and you saw an adorable golden retriever who looked like Mozzie, I bet you’d like to pet it. I would too, because golden retriever, but I would know to absolutely not pet this dog.

He’s not growling, snarling, barking, showing his teeth. He’s not crouched defensively with his hackles up. He couldn’t be dangerous, right? 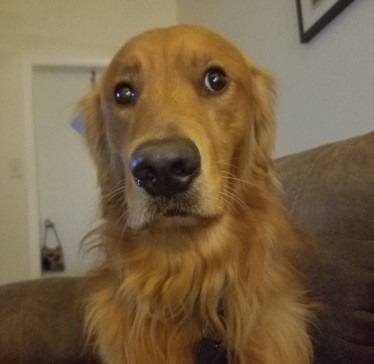 Wrong. Look closely. His ears are back and down tight against his head. He has “whale eyes,” that wide, unfocused expression saying “get me out of here.” If you saw him in person, you’d see his shoulders are hunched, his tail is tight against his body, and his body and legs are trembling.

Yes, I wanted to cuddle and hug and snuggle his scared little face, but that would only reinforce to him that there’d been something to be frightened of. I forced myself to stay calm, speak to him normally, touch and react to him normally, until he was more relaxed. 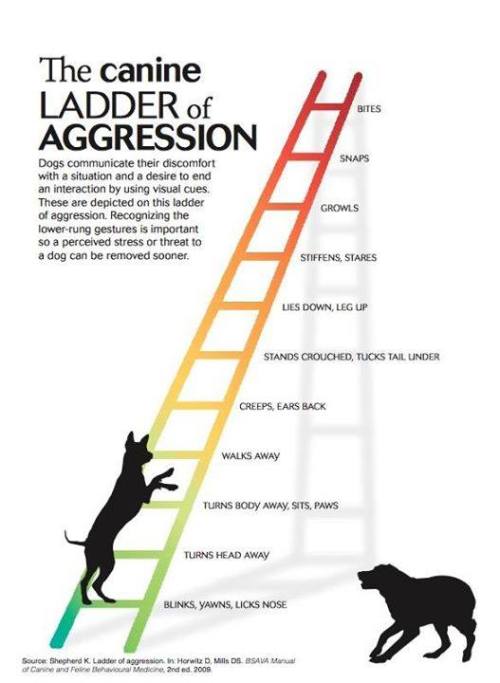 Your instinct might be to approach a dog who looks like this, to comfort or reassure him as I wanted to do, but that’s how you get bitten in the face. Do not ever, ever do this. Not in the park, not with your aunt’s dog, not with any dog who is not your own…and not even then if you’re not 100% certain how he’ll react. I know Mozzie wouldn’t have bitten me, but I didn’t want to reinforce his fear response. I don’t, however, know for sure how he’d react if a stranger tried to grab or snuggle him when he’s that close to the edge.

When you’re panicked, you react out of character. Even I, if you cornered me and freaked me out and got too close, would bite you. Though, to be fair, I’m a known fear biter. Point is, even the sweetest, meekest dog can lash out if it is approached mid-freakout.

Every time I see this picture, my blood pressure almost makes my head explode. This dog is doing everything it can to “tell” the kid (and the parents, who sure as hell better be nearby) that it is not enjoying this interaction. But people say “awwwww, how cute,” and the next thing you know, the kid is missing a chunk of her adorable little button nose, the dog is wondering why everyone is screaming and trying to hit him…yeah, nothing good is going to happen.

If you want to learn more, I highly recommend Canine Body Language: A Photographic

Guide Interpreting the Native Language of the Domestic Dog by Brenda Aloff. I’ve had it for years, and it’s the best all-in-one guide I’ve seen. We used it often in our veterinary practice, and most rescue groups use it as well.

Dogs aren’t toys. They’re sentient creatures with feelings, and those feelings matter. You expect your dog to have good manners, right? Well, you’d damned sure better have them too. Failing to understand and respect their language and pushing them beyond their endurance will not end well. You’ll end up with a traumatized, injured person, and likely a quarantined and ultimately euthanized dog.

People who love dogs but forget their language isn’t as straightforward as ours when it comes to saying “back off” are all too often loving their dogs…to death.