Hermiting is hard. My answer to “Do you want to go…” is nearly always “No.” But from time to time, I have to suck it up and go somewhere, because holding Tom hostage at home isn’t really fair. Staying in and having some adult beverages and watching Netflix used to be an option–my favorite–but apparently we don’t do that anymore. Well, I do, every night when Tom goes to bed, but I guess that doesn’t count.

Tonight is one such night, when I have to dress like a normal person and go out. There’s a 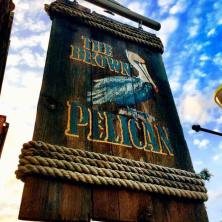 “battle of the bands” at our favorite bar, The Brown Pelican, and he wants to go…so we’re going.

I used to love music, and we followed one particular band, going on multi-day roadtrips to catch several shows on consecutive nights. But a falling-out (lead singer/guitarist turned out to be a ginormous ass-crumpet) led to me no longer liking music…at all.

Back in those days, going out involved meticulous planning, with every detail of my hair, makeup, outfit, shoes, and accessories carefully coordinated. Now, I’ll get a shower. Probably.

While the main challenge is that I’ll have to converse with non-canine individuals, today has another obstacle. It’s March 31, technically spring. It’s also Easter weekend, or so I’ve heard, since I’m non-religious, and that’s considered a spring holiday. But it’s also a little chilly, with the temperature expected to be around 50 degrees this evening when we head out.

Definitely too cool for my cute summer tops. I tend to be cold, so even a short sleeved top is probably out. But if I wear a sweater, will I look like an idiot? Too cool for my new sandals…but black boots? Too winter-apparel-y?

I thought about wearing a garnet-colored long-sleeve top with my first knitted scarf,

which is light-weight and could be okay, but that might look like I think I’m still in Minnesota rather than eastern North Carolina.

So, what to do? Barring a meteor strike or robot uprising, we’re going. I’ll probably spend an hour standing in my closet and staring at the available options, which is almost like shopping because I go out so rarely that I find myself saying, “Oh, hey, I didn’t remember I had that.”

Probably too late to knit myself a light spring sweater, especially since I’ve only been knitting for a month and have no idea how to go about sweater-making, and it takes me two weeks to make a stupid scarf.

Whatever I end up wearing, the strategy will be what it always is, which is to reach the correct blood alcohol level to make me temporarily forget I’m a major introvert and avoid a panic attack. I probably won’t have a terrible time, but it’s not even 10 a.m. and I’m worrying about it, and that’s a lot of hours getting myself worked up over nothing.

See? I keep telling everyone hermiting is hard, but only other equally-dedicated introverts believe me.

(DISCLAIMER: As an editor, I desperately want to punctuate the graphic at the top of this post. I normally won’t use any meme with spelling, punctuation, or grammar errors, but I love Bugs Bunny too much to pass this one up.)

I’m not a people person, but I’m especially not a kid person. The only one I’ve ever cared about was mine, and he’ll be 34 tomorrow, so even that is well in the past. I do not want to hold your baby. I don’t want to hear the cute thing your toddler just did. I am not even remotely interested in your daughter’s dance recital.

However, if your puppy caught a grasshopper, I totally want to hear about that in great detail.

As I mentioned in THIS post and THIS other post, we have new occupants in the rental 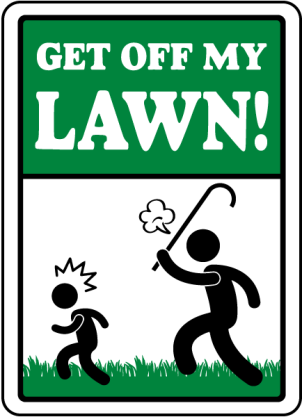 house across the street, and this is causing me some anxiety. When we moved here four years ago, it was occupied by a 30-something single woman with an elderly dog, and then a couple of young Marines. They were good, quiet, friendly, but boundary-respecting neighbors, and I was okay with that.

A little more than a month ago, people appeared over there. I had a hard time figuring out who the residents were, as the various individuals spotted seemed to vary. But after a month of observation, I’m fairly sure the ones who live there are a woman and two younger-teen boys.

Yes, I realize the “normal” thing to do would be to walk over there to say hello and introduce myself. If you don’t know anything else about me, you should be aware that “normal” is not a word ever used in any way regarding my social skills and interactions, unless it’s prefaced by “ab-“.

My issues come from the numerous other children who are there on a regular basis. The woman must do some sort of daycare, either for relatives or as a business, as two toddlers (maybe more…honestly, kids all kind of look the same to me) are usually present. There are also a boy and a girl of approximately middle school age. Maybe others. I should probably keep some sort of logbook.

This is a lot of kids.

Plastic outdoor toys started to show up in the yard. Then a portable basketball hoop was placed at the end of the street. Our house and theirs are the last on our respective sides of the dead-end street, and I have to admit that’s a pretty good setup for a basketball hoop. What they don’t know, however, is that patch where the road ends is considered overflow parking for our two houses. We only have a small gravel drive in the front of the house, so if you have company, that’s where they go.

Kid-faces blocked, because even I realize that’s kind of wrong.

Now the truly horrifying part. I’ve noticed these kids, who are definitely school age other than the toddler-types, are present throughout the day. Know what that means? Home school. These other kids who I don’t think live there–it’s only a two-bedroom house–might be part of the home school setup. Maybe she has some sort of cooperative with other families in her church or something. She has a “pray” sticker on her truck, and that seems like the sort of things church families probably do.

I’ve also noticed the boys tend to be out playing basketball at very regular times, suggesting home school “recess.” Our late-great dogs Darwin and Brody would’ve been very upset by this, slinging bark-drool all over the front windows and destroying the blinds. Mozzie and Oliver will take off barking if they hear a distinct noise or kid-related squealing, but other than that are doing pretty well. In fact, I have a feeling Mozzie might actually like kids–much to my dismay–because he’ll sit at the window quietly and watch them play.

I’m generally the tense, curmudgeonly one…but for some reason this basketball hoop is bothering Tom a lot more than I’d expect. The ball bounces into our front yard, and he gets all territorial. I’m supposed to be the territorial one. He’s supposed to be the laid-back, friendly, tolerant one who will chat with the neighbors when they cross paths outside, finding out who they are and letting them know we’re harmless but have definite boundaries. Now I’m finding myself saying things like, “It’s no big deal. They’re not hurting anything,” when I’m more accustomed to saying, “They’re out there…all the damned time.”

I don’t like it. I don’t like any of it. I have this shifting herd of non-adult humans running around out there, and I’m not sure how I’m supposed to feel about it. Luckily, the room where I spend 90% of my time is in the back of our house, away from the road.

I’m really, really glad they don’t appear to have a dog, though. A dog running around out there would not be appreciated by my dogs–or by me.