I recently started watching The X-Files for the first time. When it premiered almost 25 years ago, I didn’t watch much TV. But now, working at home and having access to

streaming video, binge-watching is one of my favorite things. Since I watch nearly every paranormal/supernatural show I can find, finally watching The X-Files was bound to happen.

Let me be clear about one thing. I do like the show. I’m into season 7 now, so obviously I enjoy it. I’m less clear about why it has achieved legendary status and a reboot. (I’m looking forward to the reboot seasons, though! Another week or so and I should be there.)

Since it premiered in 1993, I expected it to feel dated, and it does, a little. The cars, technology, wardrobe, even the on-screen graphics show it’s not a recent production. I was surprised to find the feel of the show felt dated even for 1993. Then I decided that’s what they were going for. Sort of a noir atmosphere, or a somber Twilight Zone tone. Fine. I can live with that.

But there are still some things that nag at me as I’m watching.

One thing I really enjoy is watching the list of guest stars after the opening theme. So many actors who have become favorites in other shows appeared on The X-Files back in the day. Mark Sheppard, Laurie Holden, Luke Wilson, Bruce Campbell, Willie Garson, Peter Boyle, Seth Green, Bryan Cranston, Donal Logue, Kurtwood Smith, James Pickens Jr., just to name a few.

So, what do you think? Are you a fan of The X-Files? What do I need to know, or what am I just not seeing clearly? I like it a lot. I’ll keep watching. But I don’t see me getting an “I Want To Believe” tattoo any time soon.

Prior to 2010, I didn’t watch a lot of television. But then I started working at home, and that Christmas our son and daughter-in-law gave us a Roku and subscription to Netflix, and I discovered what I’d been missing.

I’d always said I didn’t have the attention span to deal with hour-long programs, especially after a day at work dealing with Others, opting instead for a few favorite sitcoms. But it was becoming harder and harder to identify the “comedy” part in newer shows, and I was bored. There were so many shows others had been watching for years, and while I was late to the party, I now had the time and technology to catch up. And because I never do anything in moderation, I learned to binge-watch before binge-watching was even a thing.

For a long time, I tried to get Tom interested in what I was watching, but it eventually became clear we don’t like the same things. At all. Sure, there are a few series we watch together. We’ve watched things like The Blacklist, The Following, Revenge, Ozark, Animal Kingdom, The Last Ship, and the perennial favorite, The Big Bang Theory.

If you consider the shows I just mentioned, you’ll notice they have one thing in common. They’re all real-world scenarios, with nary a vampire, werewolf, or demon to be found.

What do I watch? I’d estimate 90% of my viewing choices involve something paranormal, supernatural, or fantasy-related. Supernatural, Buffy, The Vampire Diaries, The Originals, The Magicians, Travelers, Wynonna Earp, iZombie, The Walking Dead, Z Nation, Glitch, The Shannara Chronicles, The 100, Game of Thrones, Lost Girl, Bitten… See what I mean? One recent exception is Stranger Things, which I did get Tom to watch. Oh, also The Walking Dead, and I have no idea why this merits an exception in his mind, but he likes it enough that we went to Walker Stalker Con in Atlanta in 2016 and had a blast. 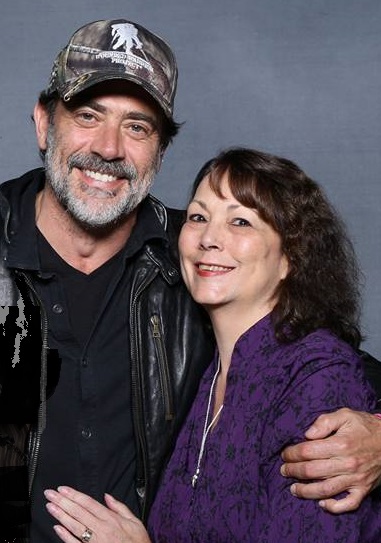 So many popular shows depict war, gruesome crimes, corrupt politicians, terrorism, corporate greed, broken families, and other distressing things. Yeah, I get enough of that on the evening news.

But take these things and put them in an alternate reality, either in a future time, on another planet or dimension, or in a version of our world where skinwalkers, vampires, demons, or magic exist, and I can deal with it. My brain understands that this isn’t reality, and I can enjoy the chaos without the stress.

I’ve never watched any of those CSI or Law & Order shows. And I have a very firm “no reality TV, for any reason, ever, don’t even go there” policy. There’s enough conflict in real life, and I don’t need to add on idiots manufacturing drama for the sake of their fifteen minutes of fame to the mix.

As a result, Tom and I watch very little TV together. Plus, he’s a football fan, and that takes up most of his viewing time about eight months out of the year–or at least that’s how long I think football season is. Maybe it’s nine.

Unless it’s football, Tom is a terrible binge-watcher. I, however, could easily sweep the medals in the Binge-Watching Olympics. If there’s a marathon being broadcast, I’m in. With Netflix and Amazon Instant Video, I can (and do) make my own marathons. Once I hit my daily editing goal for work, I can get serious and break out the yarn and current binge-in-progress.

I wish my TiVo would try a little harder, though. It’s like it doesn’t know me at all. After a mere three or four hours, a window pops up and asks something ridiculous like, “Are you still there?” Same for Netflix, if I let it automatically run through several episodes of a series. “Are you still watching?” 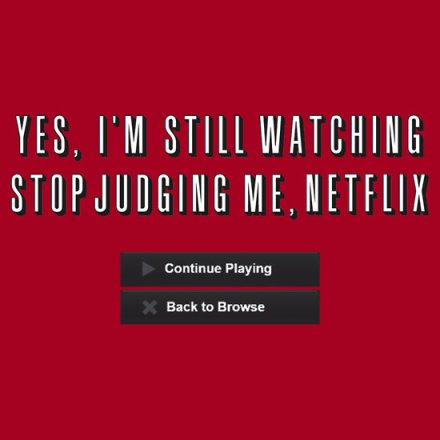 Look, if I wanted you to stop doing what you’re doing, I would’ve said so. If I want you to do something else, I’ll let you know. Stop asking. Stop judging! I realize I’ve watched eleven consecutive episodes of Buffy. That’s the whole reason you exist, streaming video, so stop trying to shame me into cleaning the kitchen. I know what you’re up to. Now, please get back to work. Spike is going to kiss Buffy, and time’s a-wastin’.

Also, we leave the television on for the dogs on the rare occasions I leave the house. If we’re out for an evening, TiVo times out after about four hours, leaving the Direwolves able to hear every sound in the neighborhood, increasing the chances of reactive bark-attacks and possible window damage.

Seriously, streaming video was made for someone like me with my obsessive tendencies and sincere desire not to go anywhere in search of entertainment. For someone who swore she didn’t have the patience to watch an hour-long program, I sure turned out to be very, very wrong.